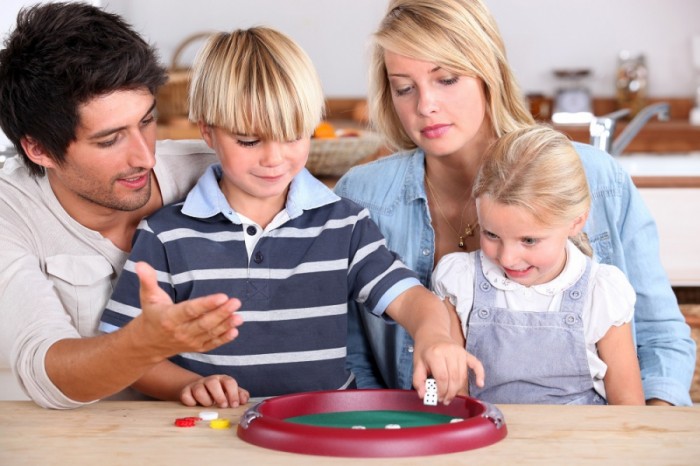 Many people only use dice when playing packaged board games. However, there are some excellent dice games for kids that use only a pair of dice and a piece of paper for score keeping.

Dice games are popular for a number of reasons, among them:

Our collection of dice games for kids includes information about skills developed, just in case you need this information. However, remember that dice games are not usually played to educate, but to have fun!

Before we show you our collection of dice games for kids, we suggest you read the following tips for ways to utilize your dice, store them, and have some control over the games kids play.

For all of our dice games for kids, you will need pencil and paper for keeping score, a shaker for the dice, and a flat surface.

“Knock Out” Dice Game for Kids

“Knock Out” is a very simple game, using just two dice. As soon as a child can recognize their written numbers, they can play this game.

Decide before the game a score to be reached for a win.

A good game for introducing your kids to the fun of dice games, this easy-to-learn game is one that is very popular with kids. It is sure to become a family favorite!

Dice needed: 2 for younger players and 7 for older players

Directions for play: Each player takes a turn rolling the dice and placing them in order to make the highest number possible. For example, if a player throws a two and a three, they have 23. A player who throws a six and a four would win the round as they have the higher number. After each throw, a player challenges the next player, “Beat that!” Play this game in rounds, assigning a winner to each round.

”Catch Up” is a great game for groups of children as you need at least four and up to eight kids to play. If you have more than eight kids, split them into groups of four to eight players. Large families and teachers will find this game effective. You will need counters or small toys for each child.

Object of the game: To be the first player to win three counters.

Note: The chant is marked with / showing every two beats.

A child wins the round when he is still in possession of a die and receives another from the player on his right. The winner of the round collects a counter and the first to collect 3 counters wins.

If a player roils the highest total for a round, they win the round. Keep score and the player who wins the most turns wins the game.

Here is a very simple game of sequences or runs.

Each player takes a turn rolling the dice and looking for runs starting with (1-2, 1-2-3, and so on). Each dice part of the run scores five points. A player can only have one run in each roll. The first who reaches 100 points is the winner.

“Stuck in the Mud!” Dice Game

The fun of this dice game is the unpredictability. Some turns end immediately and some seem to go on forever. Players can only score on a roll which does not include the numbers 2 and 5. Any dice, which show a 2 or a 5, become “Stuck in the mud!”

Object of the game: To achieve the highest score

Agree a number of rounds – five works well – and total up the score.

This dice game is simple and fun, which means it is popular.

Object of the game: To get the highest score

Players take turns rolling all five dice and scoring for three-of-a-kind or better. If a player only has two-of-a-kind, they may re-throw the remaining dice in an attempt to improve the matching dice values. If no matching numbers are rolled, a player scores 0.

Set the number of rounds for the game and the player with the highest total score at the end of a game is the winner.

“Round the Clock” Dice Game

This easy game works well for young children as soon as they can recognize the number of spots on dice and count to twelve.

Object of the game: To be the first player to throw all the numbers from 1 to 12 in order

Variation: A player can keep throwing the dice during their turn until they fail to get the number for which they are trying.

Even though the directions make this game sound easy, unless you are good at throwing 1s, this game may be hard for to play. The game is called “Pig” because the first player “hogs” the dice in an effort to win the game.

Object of the game: To score 100 points or more

Dice games provide fun for everyone, from very young children to the elderly. Additionally, some families enjoy collecting dice, which can be found in old table games at garage sales, at discount stores, and in educational supply catalogues. Try all of our dice games for kids and have fun!