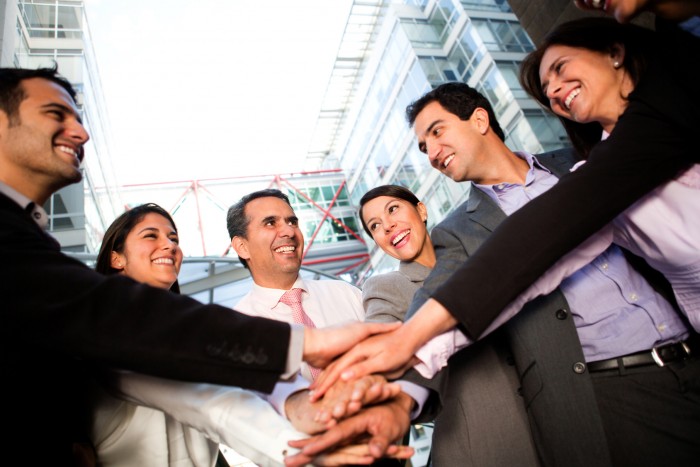 One of the greatest things we can teach children, teens, and adults, of all ages, is the ability to work with others as a team to get the job done with positive results! These Team Bonding and Team Building activities and games are designed with the main focus being, “As we work together as a team, we all succeed!”

You will need: sturdy rubber bands (able to stretch big enough to stretch and release a red solo cup without breaking) pre-cut strings or yarn about 18 inches long, and six red solo cups for each group

Before the game begins: The leader will tie four strings on each rubber band so it ends up looking like a sun with a north string, a south string, an east string, and a west string. Each group will need a rubber band with the strings connected. If there is an odd number of people, simply add another string to a team’s rubber band to make a team of five.

The best advice I have is to practice moving the cups and using the string yourself before you try to teach it to others.

Beginning the game: There are three Cup Creations patterns that get progressively harder for each group to do. I showed my groups the first pattern before asking them to make it. Then, each person in the group had a clear picture of the end goal. Before beginning, the six cups are nested inside each other. Each member of the group can only hold their string, not the rubber band. The team stands around a table, with nested cups in the center area, or they sit on the floor in north, south, east, or west facing the nested cups in the center.

Finally, all players pull back on their string to allow the rubber band to move out, away from the cup, and they repeat the process getting the next cup, etc. If a cup tips or falls on its side, a person puts the cup back on the nesting cups to begin again.

After the game: Talk and share as a whole group what was learned about team building, and working together to reach their goal. 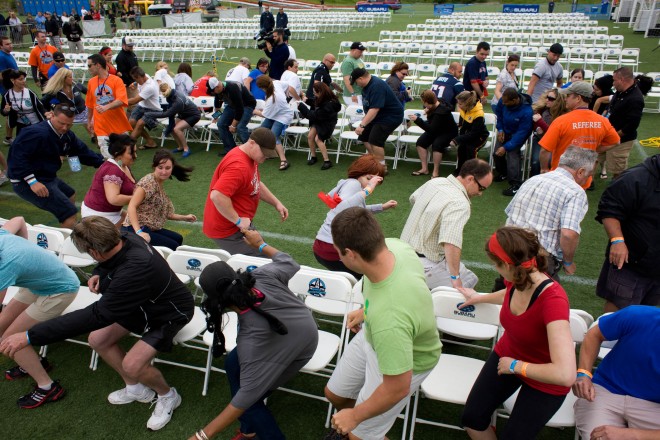 You will need: One chair for each person arranged back-to-back like musical chairs, with one chair taken out to begin the game. Some type of music player that can be turned on and stopped to cue players when to sit down.

Your group of any age children, teens, or adults will have a great time playing this team bonding and team building game! Begin like regular musical chairs with the players walking around the chairs. When the music stops, and everyone sits on a chair, the player who doesn’t have a chair is not out of the game. Instead, one of the players moves over and shares his or her chair with that person.

Continue to take out chairs, and each time the music stops, the players without a chair share a chair, or sit on the lap of another player. By the end of the game, with one chair left, all of the players are sitting on each other’s laps, laughing, and having a great time! There are no losers in this game, and everyone feels included!

After the game: Take the time to talk to your group about what was learned about team bonding and team building. Hopefully, they will see the value in everyone helping each other so that everyone can win. 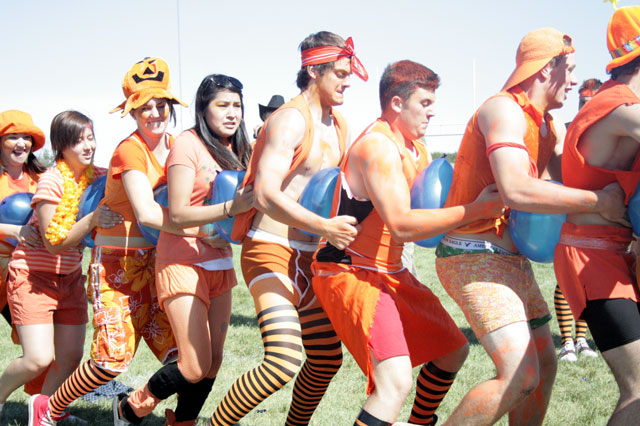 You will need: a large area like a gym or outdoors, and enough blown-up and tied balloons for each person in the group (the round balloons need to be the same type and the same size when inflated to make the game fair). Have extra balloons ready in case players want to do it again. Spend a little more to get a better quality balloon for this activity. You’ll be glad you did!

Object of this team bonding and team building game: for team members to successfully move as a group with each balloon securely between the player in front and the player right behind. Each team member will have to help keep the balloons from falling or popping. Once the balloons are in place, they cannot be touched until the team finishes the game.

Divide your children, teens, or adults into groups of 5 – 8 players. Give every person on each team a balloon. Have players on each team move close enough to place the balloon between their front and the back of the person in front of them. The balloon has to stay without any hands touching it. The person at the front of the line may hold his or her balloon with one hand.

If a player’s balloon falls or pops, he or she stays in place with the team to keep going to the end. The team with the most balloons still in place is the winner of the Shaky Snake Balloon Relay!

Variation: As each team walks to the end of the gym or a set place outdoors, the team each holds their balloons to turn around so they can walk back to the starting line, which now is also the finish line.

After the game: Have team members set their balloons away from where you want them to sit to debrief about the game. (Otherwise, players will be hitting and making noises with their balloons). Let them talk about the things that worked as a team, as they completed the activity.

We Can Make It – Rope Game 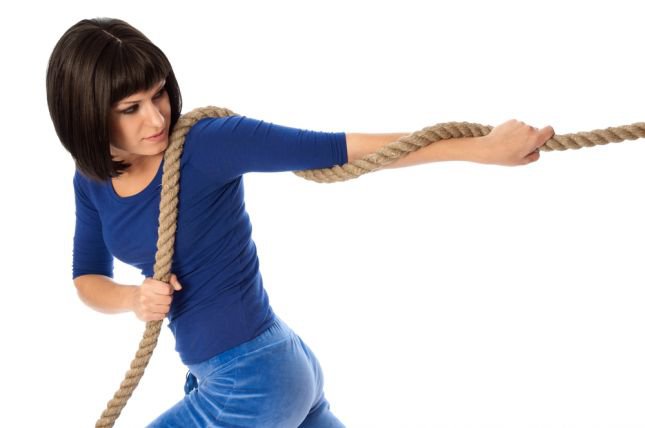 You will need: A long rope or cord, (I cut my ropes 10 feet long) so that each person on the team can hold a part of the rope without touching another player; blindfolds for each person

The objective of this game: to work as a blindfolded team to make the shape that the leader calls out using a rope or cord.

Divide your teams into groups of 5 – 8 players, depending on the length of the ropes, and give each team a rope or cord. The players will stand in a line while holding on to their team’s rope. Have each player secure their blindfold so no one can see.

After the shape is called out, players can talk and move forward, backward, to the side, or hold still as they work together to make the shape with the rope or cord.

When the team members think they have completed the shape, have them remove their blindfolds to check their success. To begin again, have each team stand in a straight line, holding the rope, with blindfolds secure, and have the group leader call out another shape.