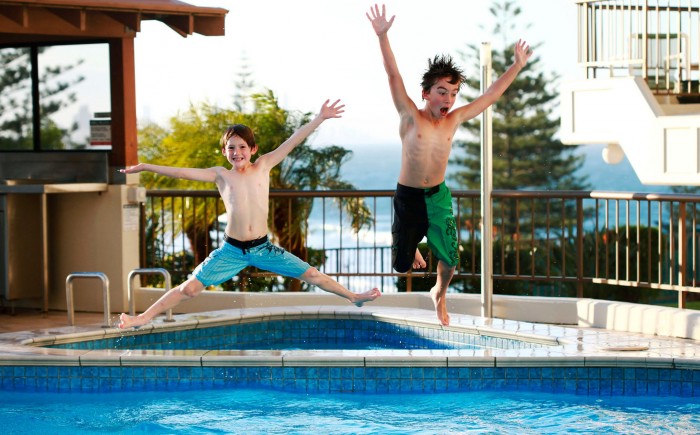 Summertime is a perfect time to play in the water. Pools, beaches, and lakes provide perfect places to cool off and play a fun water game. Not all water games require that you get in a body of water. Water balloon games also cool off participants and provide a great deal of fun. Try out one of our many swimming pool and water games the next time you have a party or get-together.

Water games are fun for every age and perfect for hot summer days, picnics, and camp – any outdoor activity. Make sure parents know you are having a “Water Play Day,” as bathing suits need to be worn for most of these games.

Fill a bucket with water and inexpensive sponges. Designate one player “It.” On the signal of “Go!” It tries to tag other players by throwing wet sponges. The last one left becomes the next “It.”

Teams gather in lines some distance from the beach. Each team has a member go, in relay-race fashion, to the designated place on the beach carrying the lawn chair and the beach bag.

The team that has all members complete the tasks first is the winner.

Line up players in two teams with an equal number of players. The first player on each team is given an ice cube. The child rubs the ice cube between his hands for as long as possible to try to make it melt. When a player’s hands get too cold, they pass the ice cube to the next child in line. The first team to melt the ice cube wins. 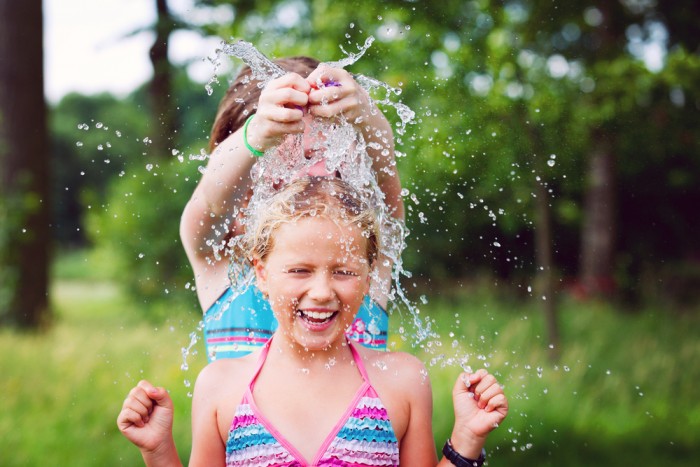 Water balloons provide a fun, inexpensive game tool. The tossing games that we have shared can all be played as team games.

You will need filled water balloons that have holes poked in them with a safety pin. You want more than one so you can play this game more than one time. Players stand in a circle, tossing the balloon to other players. The goal is not to be holding the balloon when it runs out of water.

You will need enough water balloons for each set of paired players plus some extras to replace those popped. Two lines of paired players, facing each other, toss a water balloon back and forth, taking a step backwards after every toss. The winning pair is the one that is able to do so the longest without popping theirs. You can play this game over and over.

You will need a large supply of water balloons for this game. Have players play catch with the balloons. Every time one breaks, do not provide a new balloon unless the player who dropped the balloon sings a song. Suggested songs are “Happy Birthday” (at a birthday party), or nursery rhymes.

Divide the players into two teams with an equal number of players and water balloons. Have the teams face each other a good distance apart. When you yell, “Go!” the teams try to hit members of the opposing team with water balloons. Players hit are out. When all the water balloons are gone, the team with the most players remaining wins.

Warning: Make sure you pick up all the broken balloon pieces, as they are dangerous for young children (a choking hazard) and wild life. 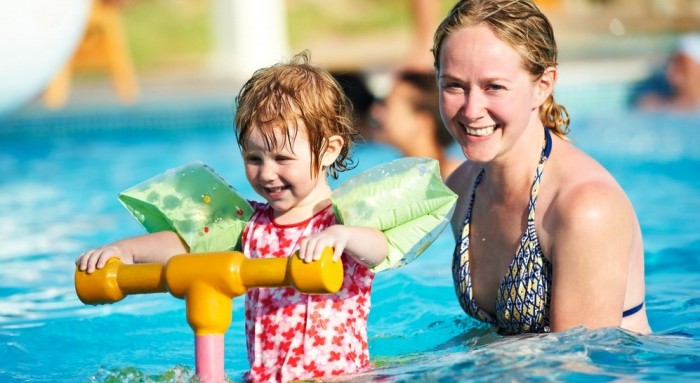 Always be careful and sensible when playing in or near water. The games mentioned here should only be played in swimming pools and by those who are able to swim without help.

Follow these rules when you play swimming pool games:

Remember to keep the race course safe. Also, use common sense, such as use of the shallow end for swimmers who are not confident in the water.

Include things such as swimming through hoops, pushing a ball through the water, swimming underwater, retrieving objects from the bottom of the pool, etc. 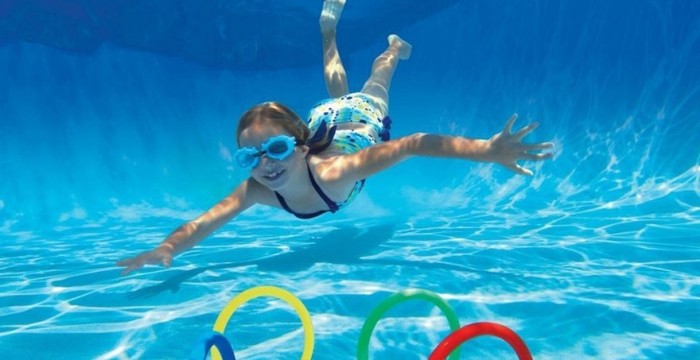 Compete to see who can:

Fill an empty, clear, two-liter plastic bottle with pool water. Try to use one with a white cap, or a cap the same color as your pool tile. Line the players up on the pool deck with their backs to the water. Throw the bottle into to water and when the players hear the splash they turn around and try to find it. This is harder than it sounds as the water camouflages the bottle.

Shark in the Pool Game

This game of tag allows players to hop in and out of the water. The shark – It – tries to tag players when they are in the water. If the shark tags someone, they become “It.” Players can only stay out of the water for 5 seconds at a time to give the shark a chance to catch them.

Variation: Players are not allowed to leave the water. Once a person is caught they either stand or sit on the side of pool.

All the players in this game try to get from one side of the pool to the other without being tagged by It. If a player is tagged, they join hands with it in the middle of the pool. They join It in tagging other players. Each player tagged holds hands with the players attached to It. Eventually you have a long line. The last player remaining not linked to the others become the next It.

A classic game of tag in the water, a player is chosen to be “It.” With eyes closed or back turned, It yells “Marco!” The rest of the players respond with “POLO!” while they move around the pool and try to avoid being caught. 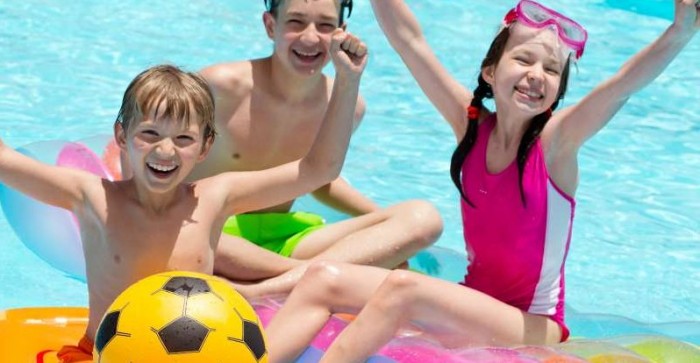 These water games for kids provide hours of fun. Use them at parties or to keep kids entertained on a long, summer afternoon.

One player plays Simon and gives directions for the other players to follow, such as:

If a direction is given without “Simon says . . .” and a player follows this direction, the player doing so is out. If someone does not obey a Simon Says direction, they are also out. The player that remains the longest becomes the next one to be Simon.

This fun water game is best played in the shallow end of the pool, unless your group is made up of strong swimmers. Play water polo across the width of the pool with two targets, such as floatation boards set on end, set up as goals at either side.

Players include a referee, and two goal keepers.

When a player holds the ball, they cannot move. They must either try to score a goal or throw the ball to another player. All other players, including the goal keepers, are free to move, but must remain in the water. If the ball goes out of the pool, it is handed to the nearest goalkeeper who makes a throw. Whenever a goal is scored, the ball is given to the referee to be thrown into the middle as a `toss-up’ between teams. 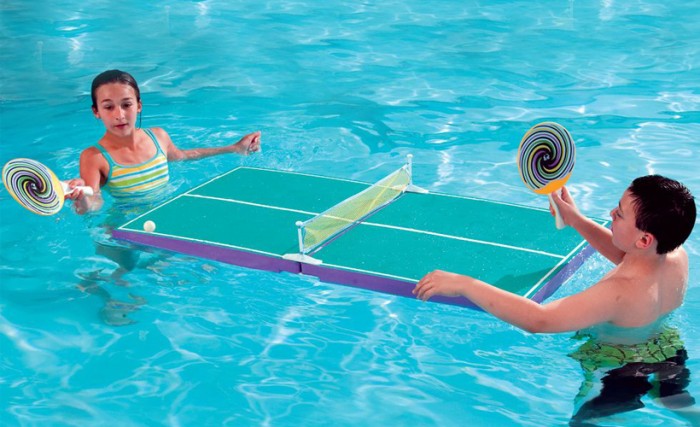 It is just as fun to collecting things that float as it is collecting things that sink to the bottom of the pool. Ping pong balls work perfectly because they are light weight and hard to see. If you wish, you can put numbers on them for point values, initials on them and have players find just their own, etc. The more ping pong balls you toss into the pool the more fun it is. 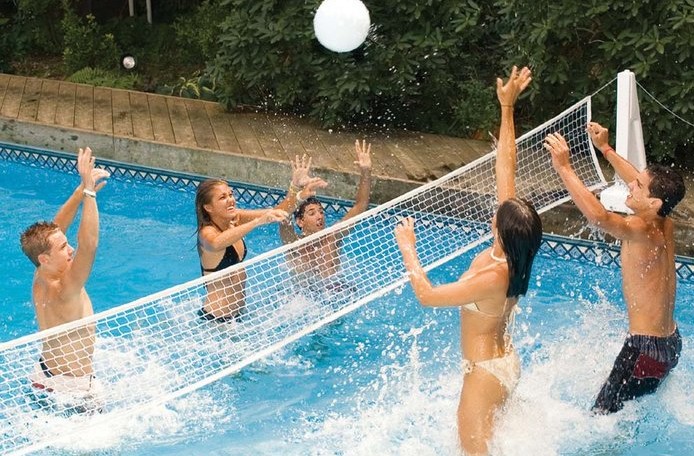 Adults will enjoy these swimming pool games designed just for them.

Nominate someone to be the leader. The leader has to do something funny, such as:

The other players then have copy what the leader did. If a player gets any part of it wrong, they get given a C of the word CHICKEN. Once a player has collected all the letters that spell CHICKEN, they must get out of the pool, do the chicken dance, say, “Bok, bok,” and jump back into the pool.

If a player wishes, they can also decide to chicken out to avoid getting a letter. However, if they do so, they are out of the game.

Pair up players. The goal of this game is to swim in pairs with one doing the arm movements, and the other doing the leg movements. This is harder than it sounds. Players race to the end of the pool to see which pair wins.

Swimming pool and water games work well with every age and in many different environments. Try water games at camp, for a backyard party, or at the park. Not all of our games require a large body of water. Some we have shared use sponges or are water balloon games. Make sure you have adequate supervision for swimming pool games for kids. Swimming pool games for adults can break the ice and make a party or get-together more fun. Whichever game you choose, age group it is for, or occasion for which it is used, you are sure to have a fun and memorable time.