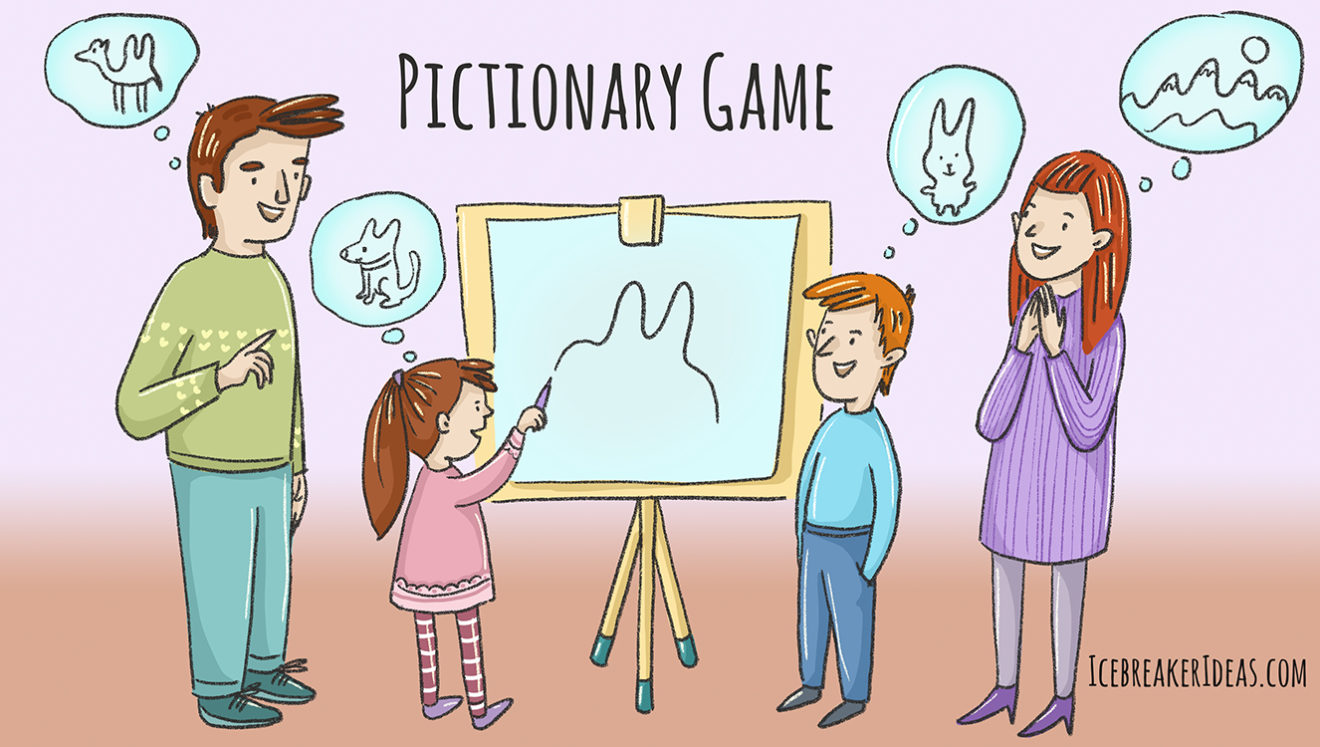 A fun game for families, parties, or any group activity, Pictionary is a drawing game where one person draws and other players try to guess what is being drawn. Pictionary works with as few as four people or can be played with teams consisting of two or more papers. Pictionary is basically charades with drawing.

One can purchase the board game, Pictionary, or create the game at home. In the board game version of Pictionary, even numbered teams use dice to make their way around a game board. The boxed game includes the Pictionary board, a one-minute timer, 4 category cards, 496 keyword cards (5 words per card), die, 4 pads of paper, 4 pencils, and official Pictionary board game rules. Players roll the die, and when they land on a spot, they choose a card from a stack coincides that with the indicated category. The player draws whatever the card says and team members have a minute to guess the phrase or word correctly. If the team guesses right, they get to roll the dice and move forward; if they are wrong, it is the other team’s turn. The first team to reach the end of the board is the winner.

If you do not have a purchased Pictionary game, you can still play this fun and active game. This article will detail the equipment, method of play, and rules – everything you need for a homemade game of Pictionary.

How to Play Pictionary 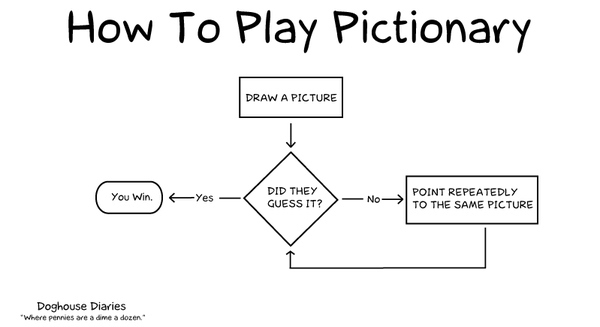 Appoint one person to write down the items, phrases, etc. that players must draw. This person will also serve as the timer and as a referee, making sure players follow the rules and resolving any disputes. Divide the players into teams, with at least two people on each team. Let the teams choose a name and then provide each team with plenty of paper and a pencil or pen for each player. After deciding which team goes first, have a member of that team draw a slip of paper from a box, bag, or basket with a word or phrase on it. When the referee says, “Go!” the designated team player draws the word or phrase and their team guesses the meaning of what is drawn. The time limit is one minute. If their team correctly guesses the word, they receive one point. The other team repeats this process.

Before the game begins, decide what must be achieved to win the game. Some suggestions are:

There are many variations for the Pictionary game, some designed for specific ages, others for certain occasions, and still others for special groups.

The traditional game of Pictionary uses five categories or themes: people, places, or animals; action; object; challenge; or all play – a word from any of the other categories, which all players except the drawer guess.

Pictionary can be a bonding activity for parents and children when game cards include categories reflecting family vacations and activities. Another idea is to use the seasons of the year and family-specific activities for each one. For example, winter drawing ideas might be snow, snowman, ice, Christmas, etc.

Use Pictionary to help your children master vocabulary words in a variety of subjects. Categories might include history (people, places, and things for a specific area), grammar (parts of speech), and science (plants, animals, etc.).

In Themed Pictionary, there is an overall theme for each round of play. Themed Pictionary works well for special holidays and celebrations – Christmas, Thanksgiving, Halloween – as well as parties, such as a baby or bridal shower. Themed Pictionary is a great way to involve people and help them get to know each other.

For Partner Pictionary, instead of having two teams, each person is paired with one partner and the two players switch off who draws the item and who guesses. Partner Pictionary works well for large groups. Head-to-head Partner Pictionary sets up like a tournament, with each team of two playing another team of two in one round of play. The winner of each round is determined in one of two ways: 1) the first team to reach three points, or 2) whichever team has the most points when time is out. The winning partners move on to the next round. This tournament-style play continues until there is one winning pair. Make sure you keep track of everyone’s scores. 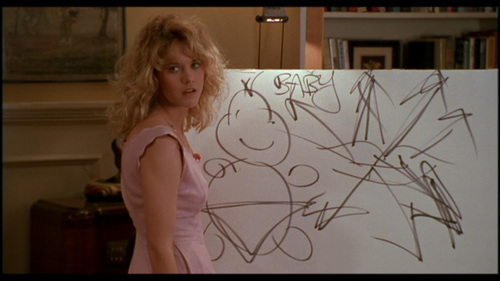 Some rules for Pictionary apply to all games and players must discuss and decided upon some rules prior game play.

The “official” rules for Pictionary are:

Almost any word list with words and phrases capable of artistic rendering will work for Pictionary. Some suggestions you may wish to try follow:

There are many different ways to play Pictionary. You can vary the categories to suit whatever the group or occasion requires. Use your imagination and this game will always be fresh, new, and exciting.