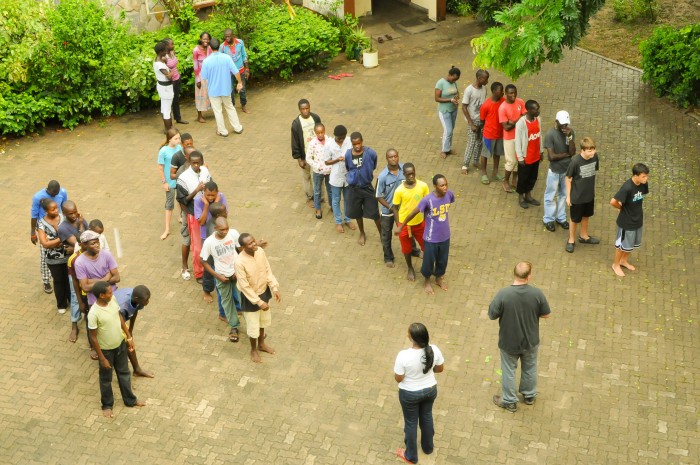 These group games are appropriate for ages eight to adult. If you have younger children participating, simply modify the games so that each player may feel successful.

Information will be given for materials needed, space required, suggested ages of players, and how to play the game.

Space required: space for a large group of people to move around and drop to the ground without getting stepped on by other players

How to play the game: a large group work best for this game.

To begin, have all of the players stand or sit, with their heads down and their eyes closed. Pretend to tap players, as you move around the area. Really tap about three – six players depending on the size of your group as you move around. The players you tapped are the “winkers.”

Have players put their heads down, and close their eyes, and the game begins again, with new “winkers” being selected.

Materials needed: a cup and plenty of water to throw on some of the players and a chair for each person to sit on

Space required: this game is an outdoor game because of the water

A group of 6 – 10 players work best for this game. If your group is larger, simply divide your players into smaller groups. Have players put their chairs in a tight circle, so that each person’s answer can be heard by the whole group.

One player stands in the middle of the circle with a cup of water. That person selects a category, and also chooses one popular item that they believe someone will say.

For example:  The category is cars. (The center person thinks of one type of car – a Porsche, but does not say it out loud).

Here are some ideas for categories: 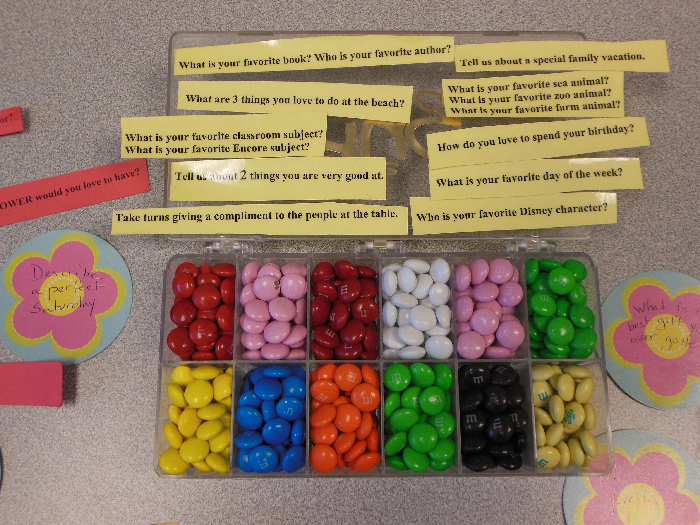 This is a fun get-to-know-you game. The players find out new things about each other as they introduce themselves to the group. The players will be using their candy colors to share information with the group, from the different color categories.

Materials needed: a small fun size package of M&Ms, or Skittles for each player. Each person will need at least five pieces of candy. You may let players take a spoonful of candy out of a bowl, and put them in their hand if that is easier. Instruct players not to eat their candy until told to do so.

Space required: space for each team to sit and listen to the person telling their “candy” information

Suggested ages: children, teens, and adults. Group sizes should be around 6 – 12 people. If you have a large group, divide the players into smaller groups to make it easier to hear the players as they speak.

Before the game begins, write the following information on a white board, or a very large piece of paper, or poster board.

If your colors are not the same as the colors listed above, write your poster with colors to match the candy you have.

Have each person choose one piece of their candy, and when it is his or her turn. They tell their answer according to the color of the candy.

For example:  My favorite place on the whole earth is going up in the mountains to hike. (Then that person could eat their blue piece of candy).

Each person in the group chooses a color of candy that goes with something they want to share with the group. After sharing, that person gets to eat that piece of candy.

Keep the game moving as quickly as possible!  Everyone will be anxious to eat their candy! 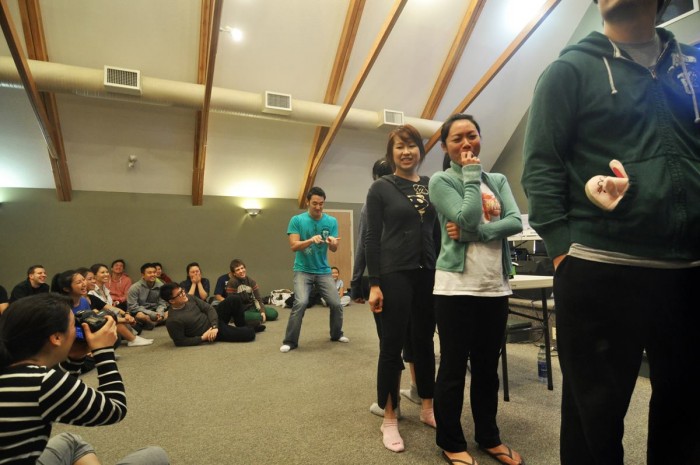 Materials needed: note cards and pens for players to write down their humorous actions and charade ideas

Space required: an indoor space works best, and enough room for people to divide into teams of five or six people

One team is selected to come up and stand in a line. No words can be spoken by any of the members of the acting team. The first person gets a card telling what the action will be. The second team member watches the first person act out the charade. Everyone else on the team turns their back on players one and two; so they cannot see what is being done. Let all of the players know they will get tapped to turn around, when it is their turn to watch the action or the charade.

If the last person guesses the action correctly, that team gets a point. If not, they receive no point for that round. A new team is chosen to come up and act out a new charade or action.

Check out our special article about “Telephone Game”

Space required: an large indoor space like a gym or a large marked off outdoor space works best

A category is selected for Car Lot (cars, candy, kinds of fruit, etc.). Two or three players are chosen to be “it” and stand in the middle of the playing area.

When the “it” people call out one of the three categories, everyone who picked that choice runs to the other end of the playing field; trying not to get tagged by one of the people who are “it.”

Example:  One of the “it” people calls out, “The category is fruit. The choices are pineapples, grapes, and strawberries.”

(Wait for players to SILENTLY choose one fruit)

When each fruit is called, each player that selected that fruit runs. If someone is tagged, he or she sits with legs folded and tries to tag the other players.

If the number of players sitting becomes safety problem, simply ask for new people to be “it” and begin again with a new category.

Space required: an large indoor space like a gym or a large outdoor space works best

Suggested ages: ages 8 and older. This activity works best with medium sized groups of people, about 15 – 25. If your group is larger than 25, select more ghosts to begin the game.

Three or four players are selected to be the ghosts. All of the other players find a spot and stand still in that spot. All players, except the ghosts, need to close their eyes.

The ghosts will move around the playing area. They will try to get other people “out” by standing closely behind a player for 10 seconds, without them knowing. If this happens, the ghost will tap that player on their shoulder and the person sits down quietly and is out of the game for that round.

If a player suspects that a ghost is behind them, they keep their eyes shut and ask, “Is there a ghost behind me?” If they are right, they also become a ghost. If they are wrong, they are “out” and sit quietly on the ground.

Materials needed: plenty of balloons or Nerf-type balls that are light-weight that can be easily hit

Space required: this game could be played in a classroom, or in a small part of a gym. Players will want to be close to each other as they try to keep the balloon or ball from hitting the ground.

Suggested ages: ages 8 and older. This activity works best with about 6 – 10 people in a group. If your group is larger, simply divide your players into two or three smaller teams. Players can compete against each other to see which team can keep the balloon or ball in the air the longest.

When a leader says, “Go!” the players tap the ball or balloon with their feet or their hands to keep it off of the ground. The team that keeps it up the longest earns a team point.

After each round, have team players switch to either standing or laying on the ground.

Space required: an large indoor space like a gym or a large outdoor space works best

Teams of 6-8 players will be in a line with their hands on the shoulders of the person standing in front of them. A player is chosen to try to catch the Rattle Shake’s tail, by tapping the last person in the line on the shoulder or head.

The people making the snake cannot come apart. They need to wiggle and move to protect the tail of the snake, so the player trying to get to the tail cannot tag that person.

Once a Rattle Snake’s tail has been caught, by tagging the last player of the snake, choose a new person to be the catcher, and have a new player be the head and the tail of the snake.

Variation:  If you want, you can have the head (1st person) of a snake, try to catch the tail of another snake. Make sure the players are not being too rough or too competitive. No one needs to be injured playing this game.

Categories: For Adults, For Kids, Icebreakers